Two-way radios, also known as walkie-talkies or PTTs (short for push-to-talk), are an incredibly handy communication device that has been used by a variety of industries since the 1920s. They were first used by the Victoria Police to communicate between cars. Until that time, believe it or not, police officers had to communicate from public telephone boxes along the streets they patrolled.

Unlike conventional radios that only transmit radio signals in one direction, two-way radios work in both directions. Users can both talk and receive communications with two-way radios. You push a button to speak (hence the push-to-talk nickname), and you release the button when you want to listen. As long as the radio is on, you will hear any time someone communicates with you.

Two-way radios typically operate on multiple channels. Users select the channel they want for any given task. Municipalities may use one two-way radio channel for police, another for the fire department and a third for paramedics. This avoids confusion and keeps channels open when they are needed.

It is extremely useful in ensuring cohesion and flow of communication when responding to emergencies like a car accident. Each party can communicate with their colleagues and respective headquarters, knowing they won’t be interrupted by another service. It also allows for cross-channel communication so that a firefighter charged with incident command can speak with a police officer by switching over to the police channel. At all other times, each department will keep their two-way radios tuned to their particular channel during regular use.

Two-way radio communication is not limited to government use. One place where two-way radios shine is in the construction industry, where their use is deservedly widespread. Walkie-talkies can be used anywhere from small two-person job sites to huge projects spanning entire city blocks.

Two-way radios make job sites safer by eliminating walking and climbing to talk to clients, coworkers, subcontractors or employees. The more rudimentary the building site, the more difficult getting from one place to another is. Every time you remove climbing on a ladder or traversing narrow scaffolding, you reduce the risk of falls. This not only makes your site safer for everyone involved. It also makes your site more productive, which translates to less downtime, increased revenue, and fewer insurance claims and lawsuits.

Initially, when mobile phones first hit the market, many people thought two-way radios would be phased out. However, the mobile phone didn’t make a dent in the two-way radio market. Construction professionals quickly learned that walkie-talkies have advantages that mobile phones don’t for providing better construction site safety.

In terms of durability, the two-way radio is a sturdier build and a longer-lasting alternative to mobile phones. A smartphone has a fragile glass screen, that when dropped or subject to impact, is highly likely to crack. A cracked screen can render this communication device completely useless, which means it’s not available for emergency use, such as a fall or onsite injury. If you think about how many times you’ve dropped something while working on a job, you know how tough your equipment needs to be.

Other advantages of depending on a two-way radio instead of a mobile phone include:

You truly get a safer workplace when you use a two-way radio. If you need to reach all of your workers at once because of an unsafe situation, you can do so with a walkie-talkie. You won’t be worried about your call not going through or not hearing what the other person is saying.

When it comes to public safety, a two-way radio is advantageous, too. Often, construction job sites verge on busy residential or commercial neighbourhoods. If you need to reach all your staff at once to alert them to a danger that could affect the public around your site, a two-way radio system is the superior choice.

Features to look out for in a two-way radio

Contemporary two-way radios have many standard features that earlier models lacked or that came with a premium price. When you look for high-quality two-way radios for your construction company or job site, consider these elements:

Sometimes, just a couple of two-way radios and their charging stations are all you need for adequate onsite communication. However, you might want to consider adding a few extras, especially if you’re on a larger site:

Digicom Wireless is your best source for two-way radios

If you’re looking for a supply of two-way radios for your construction site, Digicom Wireless has you covered. We have walkie-talkies and accessories for purchase or two-way radios for hire for sites that have changing requirements between jobs.

Our staff are friendly and highly experienced to provide you with guidance on our latest technology. Get in contact with us and we can help you pick the right radio for your requirements. With a huge selection of products to improve your operations on the construction site, as well as competitive pricing repair and service centre, Digicom Wireless has your back.

How to get the best out of your walkie talkies 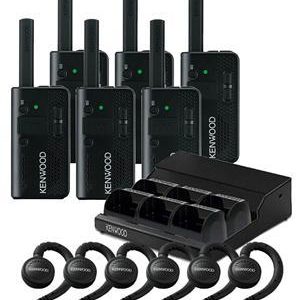